Rambling Down The Road

We collected and cashed final paychecks from Crazy Horse, did our pre-travel checklist, and set out on the road to Haslet, TX on Friday.  Mike and Claudia, a wonderful couple who worked with us at Crazy Horse and who will be working with us at Amazon, traveled with us.

Nebraska is a prettier state than I imagined!  Its Lake McConaughy, 8 miles northeast of Ogallala, was rated #14 by the Recreational Boating and Fishing Foundation on its 2015 Top 100 Family Places to Boat and Fish in the U.S.    But the winds blowing across the prairie are brutal!

Kansas, once home to Dorothy Gale, Toto, Uncle Henry, and Aunt EM, has the distinction of having the largest watershed district in the U.S.  The Pawnee Watershed District contains 1.5 million acres!  We traversed the Smoky Valley Scenic Byway, though we didn’t see many of its renowned wildflowers in bloom.  We stopped along the Santa Fe Trail for a satisfying picnic lunch that Yogi Bear and Boo Boo would have loved to snatch!   “Skyscrapers” in these parts of Kansas consist of grain elevators.
﻿
﻿
We encountered rain as we entered Oklahoma, “where the wind comes sweeping down the plain, and the wavin’ wheat sure smells sweet”.  Lots of windmills here, though their blades are hidden in the clouds!  I guess this is testimony to just how massive these windmills are, how low-lying the clouds are, or a combination of both!  We entered Woodward, “Home of the Boomers!”  Didn’t know “Big Boomer” had relatives!
We parked in Walmart and walked over to Big Dan’s for a hearty dinner.  The NY Strip was perfectly sized, succulently seared, and just plain old lip-smacking good.  Combined with a salad bar any rodent would drool over and a side order of onion rings, my entire dinner tab came to only $20!  Excellent food, service AND price earns Big Dan’s a 5-cheese rating!

We arrived in Texas to sweltering temps.  Though most of the campgrounds offered by Amazon are small, “low budget” RV parks, we are satisfied and thankful.   Unlike the facilities at Crazy Horse/Heritage Village, Texas Star has WiFi AND cable, and our Verizon phones and personal MiFi have excellent service!  (At Crazy Horse, we were blowing through our 20 gigs of data simply searching for a signal.  We never had more than 2 bars on our phones.  Ironically, Mommy got better service when walking in the ravines on Mickelson Trail than anywhere at Crazy Horse/Heritage Village!)

We did some exploring with Mike and Claudia to get the “lay of the land” of the Fort Worth/Dallas area, and found all the mainstays we require.  So far, so good.  Well, time to go.  I've gotta get to bed early--tomorrow is our big “orientation” day at Amazon!

Posted by PoPo The Rambling RV Rat at 9:03 PM 5 comments:

Hard to believe today is our final day here in South Dakota!  Mommy and I took our last walk along the Mickelson Trail, saying good-bye to all our animal friends. 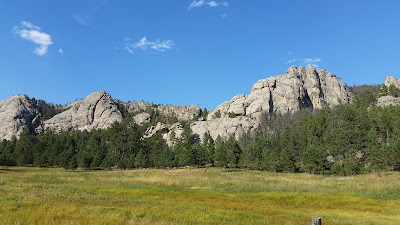 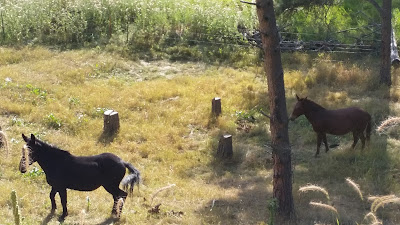 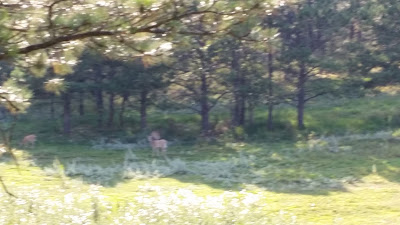 We enjoyed the Black Hills area immensely, visiting wonderful places and meeting some pretty cool folks!  Not to mention my best doggie friend at the campground, Bella.
But alas, it is time to travel on to our next work-camping adventure in Haslet, TX.  We are becoming Santa’s elves—we will work at Amazon.com for the next 3 months to fulfill holiday gift orders!


Amazon requires pre-employment drug testing.  We thought Amazon had a contract with a lab within Rapid City, which would mean a one hour drive each way.  Unfortunately, the CLOSEST lab was 214 miles away in Casper, Wyoming!  So we left at 6:15 a.m. on Monday, our day off from work at Crazy Horse, for a four-hour “road trip” to Casper.  We fulfilled our pee-in-a-cup requirement within 20 minutes from the time we walked in the door.  Not to pass up the opportunity to explore a new area, we began our tour of Casper, Wyoming’s second largest city with just under 60K people.  First order of business, feeding Daddy’s belly!  So we took the recommendation of a “local” and went to Johnny J’s Diner.  What a blast from the past!  Complete with nostalgic posters, décor, and juke box, I felt like I was starring in an episode of “Happy Days”.    Very reasonably priced, tasty food, and friendly and efficient service from our waitress Trinity!   So far, so good.  We asked Trinity for a suggestion on what to see in Casper for a couple of hours.  When she suggested The Mall, we knew we were in one VERY SMALL city.   This was confirmed after driving through “downtown”.  By unanimous vote, we rejected The Mall idea.  Instead, we consulted Trip Advisor and opted to visit the Fort Casper Museum. 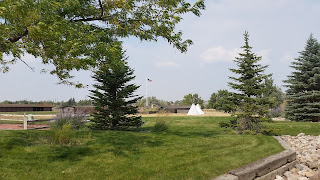 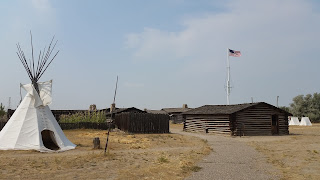 Situated in the North Platte River Valley, the area served as a gateway for the Oregon and California Trails as well as a route for the Pony Express.  Interestingly, Brigham Young and the Mormons, enroute to Salt Lake City in 1847, established a ferry service for future emigrants to traverse the North Platte River.   We enjoyed learning about Central Wyoming’s history, then headed back for the long trek to Custer.
And now we return to the road for the Lone Star State.  So as the Family Von Trapp would say, so long, farewell, auf wieder sehen, goodbye Black Hills!
Posted by PoPo The Rambling RV Rat at 12:00 PM No comments:

We will always remember this tragic day, and we keep those whose loved ones perished forever in our thoughts and prayers.  We only wish that the spirit of patriotism and heartfelt compassion shown during the sorrowful events of 9/11/01 were still visible. 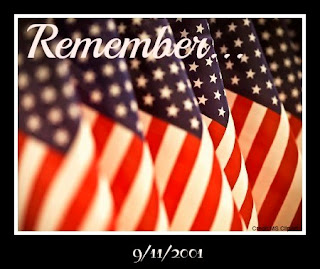 Posted by PoPo The Rambling RV Rat at 12:00 PM No comments: