A Review of Nomadland - The Book AND The Movie

What started as an investigative news article for journalist Jessica Bruder blossomed into a widely read book and award-winning film.  As you have probably guessed, I’m referring to “Nomadland”.  I have read the book as well as viewed the movie.  And as part of the full-time RVing community for the past 9 years, I thought I’d share my personal take-aways.   Please remember that this blog represents this humble Rambling RV Rat’s personal opinions.  I am entitled to mine; you are entitled to disagree. I always encourage communication, conversation, and diversified perspectives.  I only ask that we all be respectful while expressing our views.  So here goes…

I did not take favorably to the book AT ALL.  Seemingly, the author’s agenda was to show the impact of the Great Recession of 2007/2008 on senior citizens.  She laments that the loss of retirement funds, jobs, and housing left seniors little choice but to take to the road as nomads, mostly in cargo vans, searching for employment.  She reported that they would end up working for The Man at jobs that required much physicality, but in her estimation, provided meager earnings.

Over a 3-year period, Ms. Bruder attended the Rubber Tramp Rendezvous (RTR) sponsored by Bob Wells and his Homes on Wheels Alliance (HOWA).  She even went undercover at the Sugar Beat Harvest and at various Amazon Fulfillment Centers (FC), including the FC at which my parents worked for two holiday seasons to offset some of the costs of our Alaskan trip (over $17K, as outlined here By The Numbers).  While my parents would agree the work is quite strenuous, Amazon is brutally honest about the job requirements before hiring, including the length of the workday, the constant walking/standing, and even the “completion rates” each function is assigned.  Amazon DOES NOT sugar-coat or do a bait-and-switch.   And since robots and trained monkeys can do the tasks required, my parents felt the compensation package was quite fair.   But then again they don’t hate Corporate America or Jeff Bezos like many folks do.   Heck, if nothing else, the daily workout proved to be a free weight loss program!

The stories of folks detailed in Ms. Bruder's book were extremely sad and quite bleak.  Divorce, bankruptcy, drug addiction, alcoholism, or illness of a spouse could indeed inflict great financial hardship, especially during a time of national economic downturn.  As my Grandma always said, “There but for the grace of God go I.”  But bad decisions during good economic times can affect folks gravely during bad economies.  Some people don’t save for a rainy day; some may live well beyond their means; some may never have the opportunity to reach financial security no matter how hard they work.   Regardless of the reason, folks do find themselves in dire financial situations and we empathize with their plights.

HOWEVER, not everyone in the nomadic lifestyle is destitute, and/or living in a van, and/or pooping in a 5-gallon bucket, and/or eating beans every night (Hey, to each his/her/their own; there is no one size fits all in this life).  My point is that just like the diversity of the general population, the nomadic community is comprised of folks from EVERY age bracket AND socio-economic class AND utilize a variety of vehicles in which to travel.    Non-RVers unfamiliar with the lifestyle may not realize that many fifth wheel/truck combos cost just as much as homes in some parts of the country.  Or that people could spend a half million dollars (or more) on a new Class A diesel pusher bus!  So, my biggest gripe about the book is that it introduced the world to our nomadic lifestyle, but it revealed only one half of the equation.  The book focused only on senior citizens.  It failed to report that nomads come in all ages, not just those 60+ (look at how many young individuals and families are now RVing fulltime).  The book focused on financial hardship.  But many of us are just as or MORE financially sound than those living in sticks/bricks.  Many folks work as entrepreneurs or hold high paying corporate jobs that they perform remotely.  Or many folks worked hard and saved hard contributing regularly to their 401ks/savings/brokerage accounts (look at the FIRE movement [Financial Independence Retire Early].  Me thinks Ms. Bruder cherry-picked who to include in the book.   Even if the focus was only on the 60+ "senior" crowd, every senior citizen that she interviewed while working at Amazon CamperForce or at the Beat Harvest was NOT struggling financially NOR living in a van.

As for the film adaptation, I enjoyed it!  While the book emitted pessimism, the movie illustrated the positive aspects of the nomadic lifestyle, even for those with limited financial means.   One factor contributing to the more optimistic view is that many of the cast were the “real deal”, with Charlene Swankie and Linda May (whose stories Ms. Bruder included in the book) portraying themselves.  Frances McDormand gave an outstanding performance as Fern.  Her character was fictitious, though probably a composite of many people from Empire, Nevada.   Fern and her husband worked for Georgia Pacific in Empire.  The company built a mini-city for its employees, including subsidized housing, entertainment venues, churches, and schools.   According to Ms. Bruder’s reporting, employees were well compensated and could cover the monthly rent on their house with just a day or two of work.  But all good things must come to an end.  First, Fern’s husband passes away. Then Georgia Pacific gave employees 6-months-notice of the entire plant closing.  Fern found herself alone and despaired, losing her job, her home, her community, and the fiber of her being.  The movie was poignant.  Fern’s loss, grief, hardship, and struggle as she enters van-life were palpable.   But through meeting wonderful, caring, sharing people like “Swankie”, Linda May, Bob Wells, and the RTR, she learns she is not alone.  She is a part of a community, a “tribe”, with friends who look out for one another (which depicts the nomadic community perfectly.)  Fern is then determined to accept her new life, and even enjoys true contentment in its simplicity.  To me, the movie clearly differentiates being minimalistic from being destitute.  And in the end, Fern realizes she may no longer have all the material things she wants, but she certainly has everything she needs, including the emotional support of caring friends.

One very special aspect of the movie is that many scenes were filmed right in our beloved Quartzsite, Arizona (where we have boondocked for 2-3 months each of the last 7 years).  So seeing familiar places/people on the Big Screen (like Scadden Wash, Silly Al’s Restaurant, the Yacht Club, and a performance of boogie woogie by the now deceased Paul Winer) was super cool.

The cinematography had me marveling at the resplendence of our Mother Earth and reminiscing of all the wonderful places my family had visited over the last 9 years.  The majestic mountains, the calming waters, the crisp fresh air, the glorious rising and setting of our Sun, the twinkling of the night sky stars, the camaraderie of friends.  These priceless gifts are bestowed upon us by a Supreme Creator.  And this stuffed rat and his family feel blessed to be a part of the RVing community.  We enjoy and give thanks for our nomadic lifestyle each and every day.

I highly recommend all RVers see the movie.  It earns one of my Rambling RV Rat 5-cheese awards. 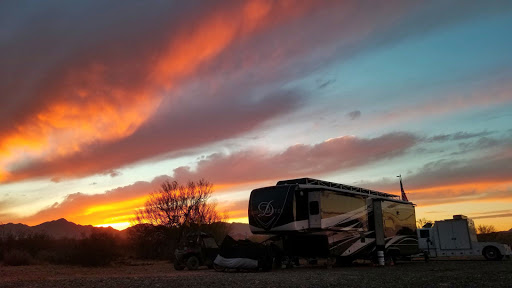 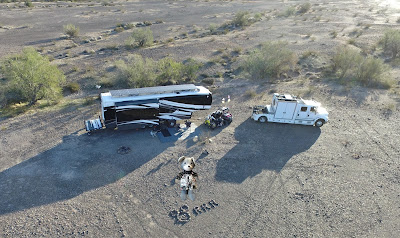