We enjoy going by ourselves on short off-roading jaunts in Rat Patrol II, our Polaris 570 RZR.  This is usually in conjunction with finding new areas to hike and geocache.   We have all necessary tools and safety equipment (including winch, Slime, tow straps, first aid kit, fire extinguisher, and satellite phone), but as newer off-roading enthusiasts we prefer not to venture out to parts unknown by ourselves.  So, we attended the February meeting of Quartzsite Off-Roaders held at the Quartzsite Improvement Authority.  It is there that we learned about the Arizona Sun Riders, a great group of fellow off-road enthusiasts.

The Arizona Sun Riders are an active group, venturing out several times per week.   Their shorter rides average about 65 miles, which is the perfect length for us.   (Since TX does not register/plate off-road units, Rat Patrol II does not meet Federal requirements for off highway vehicles (OHV) on some types of Federal land trails like King of Arizona National Wildlife Refuge (KOFA).   I was secretly relieved to learn this, 'cause I don’t think I could have handled participating in the Arizona Sun Riders' 10-hour, 130+ mile ride through KOFA.)

Some of the rides involve trailering to a start point.  We did not participate in any of those rides this year.  But we have adapted Big Boomer, our medium duty truck, to accommodate our swivel wheel for carrying Rat Patrol II for next year.

The Arizona Sun Riders are organized and safety conscious.  Most rides depart from the lot across from the Arco fuel center near Riggles Avenue.  Each ride has a leader and a tail gunner, and usually a canine mascot, too.  On average, each ride has about 14 participants.  They utilize a rotation system for keeping the group together at trail intersections, so one unit is not solely responsible for the task.  My only wish would be that they tell us the trail numbers on which we will be traversing, so we know routes for future visits.

They took us to unique places, not the standards like Dripping Springs, Deer Run, or Erdman Mine/Potty Garden.  So, without further ado, here’s some of our off-roading adventures with the Arizona Sun Riders.

Copperstone Mine (approx. 75 miles round trip).  With mascot Wilbur, we headed north towards Parker to view this mine that produced about a half million ounces of gold between 1987 and 1993.  Though shut down for some time, plans are underway to revive the mining operation later this year.

Ehrenberg Sand Bowl/Monument Hill/Cunningham Mountain (approx. 60 miles round trip).  We headed West and enjoyed very diversified terrains.  We played on the sand dunes in Ehrenberg, they went to the California border along the Colorado River to the area known as Monument Hill.  That’s where we saw the Tin Man (though there was no sign of Dorothy, Scarecrow, or Lion), and we all took turns on the teeter totter.  Coming back, the group split.  We took the less technical route through Cunningham Pass rather than the trail known as Good, Bad, Ugly (GBU).  GBU seemed to live up to its moniker—one of the riders broke the universal joint on her Wolverine’s axle.  Remember how I said we have all necessary tools and safety equipment?  Well, good old Dad was able to fix the problem temporarily so at least the rider could return safely to home base.

Spanish Wall/Antenna Hill/Swimming Hole (approx. 65 miles round trip).  We headed East toward Mitchell Mine Road to see Spanish Wall, the remains of a prospector’s trail.  Then to Nugget Road up to Antenna Hill, where various telecommunication antennae reside.  Fantastic views but windy!!!    We proceeded North, viewing some novelties and oddities, like the grave marker “COVID 2020, ROT IN HELL” and an arrow shot through the center of a saguaro.  We saw a huge natural basin that would fill with water and be used by prospectors/settlers as a swimming hole.  We returned to home base via Sunkist Trail.

Patton’s Cave/Shooter’s Wall/Tunnel to Nowhere (approx. 75 miles).  With mascot Maggie, we headed North to the cave where General Patton hid his communication systems for Camp Bouse, a secret military installation.  We spotted a big horn sheep eating along the perimeter of the trail.  My picture came out lousy (what else is new), but at least I got one, which is more than anyone else in the group could say.  Next up was Shooter’s Wall, part of an old stagecoach stop.   Folklore says those who tried to attack or rob the stage were lined up along the wall and shot.  You could see the Southern Cross Mine in the distance within the Plomosa Mountains.  We viewed a tunnel that was built to go nowhere.  It was a very windy and long day, but fun, fun, fun! 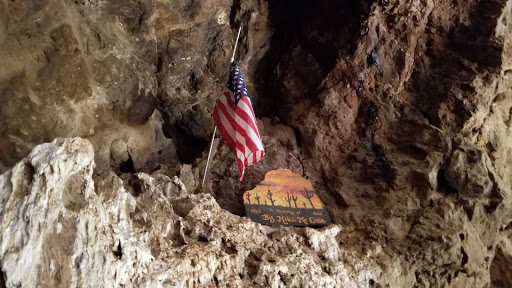 Memorial to General Patton’s Tank Brigade/Rock Art/Fisherman Intaglia (approx. 65 miles).  We headed North on the Peace Trail to see various sights within the town of Bouse.  The cement tanks, part of remains of the 1889 homestead of Thomas Bouse, served as a town swimming hole for many years until the homestead was razed in the late 1940s.   We revisited the Fisherman Intaglio and Quartzsite rock art, something we have not done since 2015.  I added my own self portrait rock art not far from here.  We stopped at the Memorial to Patton’s Tank Brigade.  We hope our off-roading adventures next year take us to Patton’s actual camp. 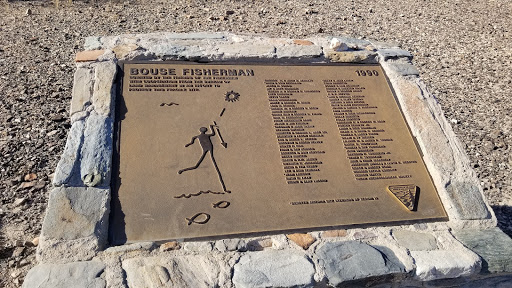 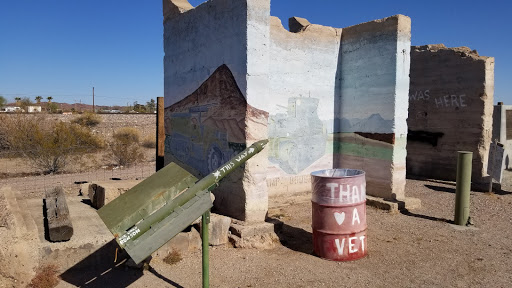 Though we have been on several sections of the AZ Peace Trail through Bouse, Ehrenberg, Cibola, etc., it is on our bucket list to one day do the full ride.   So, we attended the meeting to learn more about the AZ Peace Trail.   This 675-mile trail that runs from Yuma to Bullhead City is the largest OHV loop trail in the whole USA!

This stuffed rat spent some cheese money supporting the Quartzsite VFW by participating in their Off-Road Poker Run.  It was to be about a 35-mile run throughout Quartzsite.  But they lost about ½ the participants at Checkpoint 4 due to unclear trail directions.  So folks were delayed in returning to the VFW for the festivities which were to start at noon.  No worries.  We all arrived safety, albeit an hour or so later than everyone anticipated.  But we enjoyed the music, door prizes, and 50/50 drawings, though I was not the lucky recipient of anything. 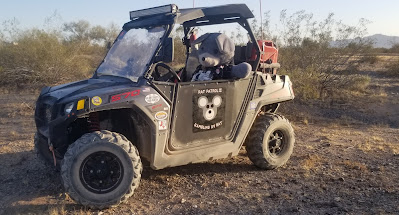 Posted by PoPo The Rambling RV Rat at 6:46 PM