After a terrific week boondocking at the Bureau of Land Management (BLM) Cienegas Natural Conservation Area in Sonoita, AZ, it was time to move on to Bisbee.  Along the way, we passed Fort Huachuca, an active Army base established in 1877.  And Bisbee is home to historic Camp Naco.  Built in 1919 as part of the border defense during the Mexican Revolution, Naco was the encampment of the famed Buffalo Soldiers.  The site, now owned by the City of Bisbee, needs major repairs and renovations, which is why the City has partnered with a nonprofit “Friends” group.

Just a block or so away from Camp Naco was our destination, the Bisbee RV Park at Turquoise Valley.  It is a small campground within 1,000 feet of the Mexican border, but it has everything we needed after a week of boondocking: full hookups, large and easily-accessible sites, free wi-fi, clean laundry facilities, and a free hookup for the streaming service Raku, all for a rate of $100/weekly or $25/daily.  Best of all, it has Bart, a loveable Labrador Retriever mix. Bart’s Dad died while staying at the RV Park, and the Park owner has since adopted him.  Bart and I became fast friends.  Of course, it helped that I had a few doggie treats in my pocket.

Bisbee, once known as the Queen of the Mining Camps, had 8 billion pounds of copper extracted between 1877 and 1975.  So, it was only fitting for us to take a tour of the Copper Queen Mine.  What an authentic experience!  Equipped with hard hats and headlamps, we traveled down the shaft 1,500 feet via the original mining cars.  John, our docent, was excellent, providing a humorous and informative narration.  His exuberance for imparting knowledge is a testament to his career in education.   We learned the various stages of mining:  shake, strike, switch, blast, and muck to remove the ore.  Unfortunately, for every 100 pounds of copper mined, 97 pounds are waste.  Mining is just one phase of copper production; thereafter are the processes of concentration, smelting, and refining.  What a fascinating tour, well worth the $15/adult admission, earning it one of my coveted 5-cheese awards. 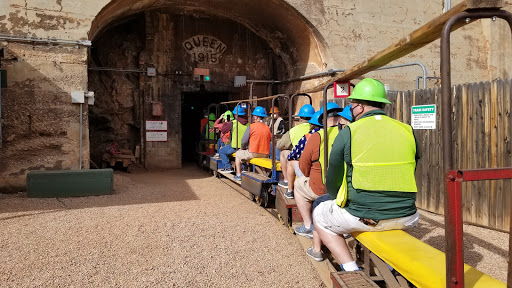 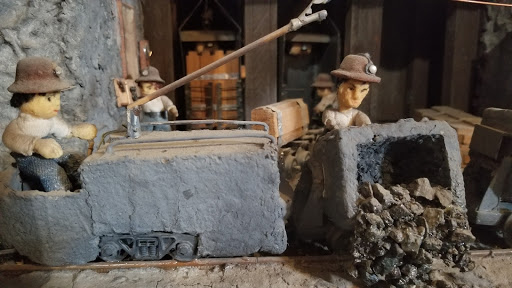 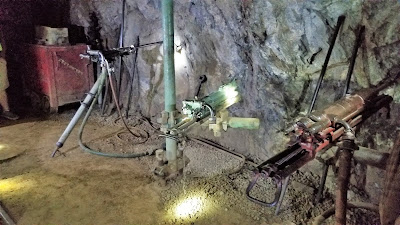 We also stopped at The Lavender Pit, an open pit mine of Phelps Dodge Corporation in operation from 1950 to 1974 from which copper, gold, silver, and turquoise were extracted.

Downtown Bisbee is an eclectic, artsy, cultural haven.  We were disappointed that so many of its boutiques and galleries were closed due to COVID and/or the fact it was a weekday.  We parked at a lot near the mine and toured the town via foot.  We learned that Bisbee holds a soap box derby race annually (pre-COVID).  I would love to watch that zaniness when they reinstate the event.    We ventured through the Brewers Gulch section of town, home to an assortment of taverns including St. Elmo’s, Bisbee’s oldest brewery (established in 1905).   There are stairs throughout the downtown, part of the Bisbee 1,000 Challenge.  I only accomplished climbing 323 stairs, mainly because I found myself hungry.  We sought out two restaurants that could satisfy Dad’s plant-based dietary requirements, but unfortunately, both were closed.  So, we walked over to Erie Street, locale of the Lowell Americana Project that depicts Main Street America circa 1950s.  There we ate at the Bisbee Breakfast Club, and old-style café/luncheonette, complete with jukebox.  Dad enjoyed a plant-based burger and Mom and I shared a tasty roast beef club.  Afterwards, we strolled down the block, viewing the old motorcycles, cars, and storefront window displays. 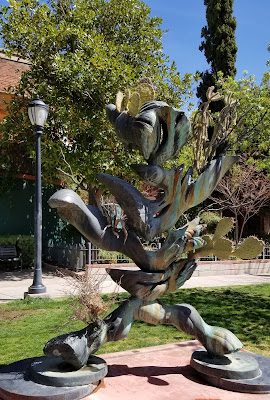 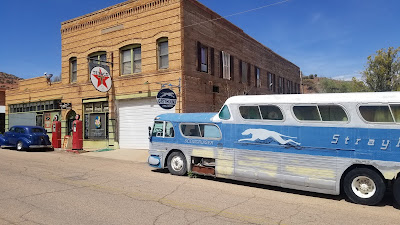 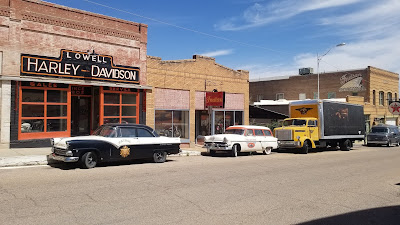 We popped over the next day to the Whitewater Draw National Wildlife Refuge.  Originally, we planned to boondock here.  But we changed our plans once we learned that all the birds who inhabit the area in winter had migrated already.  But we will keep the Refuge in mind for future use. 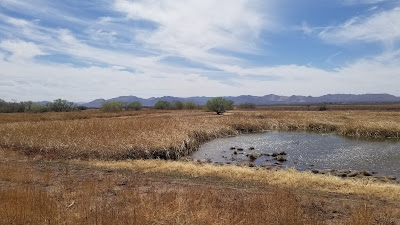 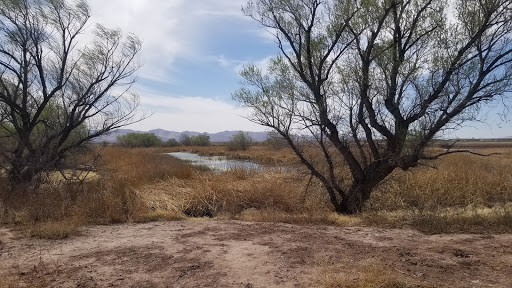 We continued on to Chiricahua National Monument, home of hoodoos, balanced rocks, spires, and pinnacles.  The Visitor Center was limited to 6 guests at a time and only gave access to the gift shop.   We were prohibited from perusing exhibits, participating in ranger programs, viewing the film, or entering historical buildings within the Park.  This was sure to make it tough for me to earn my Junior Ranger Badge here.  But a Masked Park Service Ranger outside the Visitor Center (She socially distanced by using a 6-foot walking stick as a pointer to various locations on her outdoor worktable.  She reminded me of the old schoolmarm who brandished a huge ruler.) directed me with a point of her walking stick to a pile of Junior Ranger Books which, surprisingly, came with the applicable badge attached.  Now, others would be tempted to just toss the book and don the badge to brag about the achievement.  But my parents are sticklers about honesty and integrity.   So yours truly worked diligently and studiously to EARN that badge.  Thank goodness, though, for access to the internet to educate myself about the place!

The masked Ranger also dissuaded us from remaining parked in the Visitor Center Parking Lot while we hiked the 3-mile round trip Lower Ryolite Canyon Trail, even though the trailhead originates in the lot.  She cited that our medium duty truck would be an impediment for other guests.  So, she sent us to another area to park, adding ½ mile to our hike.  But it was a nice day and additional exercise is always good. 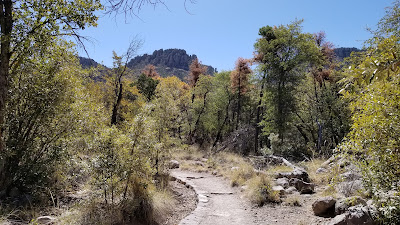 We wanted to go up to Massai Point; however, the masked Ranger said the shuttle buses were not operating due to COVID.  The sign for the road leading to Massai Point said maximum length was 24 feet.  However, the brochure we received from the masked Ranger said 29 feet.  Big Boomer measures somewhere between the two lengths.  Screw it, we said.  We rode up and encountered no problems.  Truthfully, we have been on much narrower, steeper, and curvier roads with our full set-up, let alone just with Big Boomer.  The hoodoos at the Point are reminiscent of a mini version of Bryce Canyon, but gorgeous, nonetheless.  We hiked some of the shorter trails at the Point, taking in the beauty and serenity. 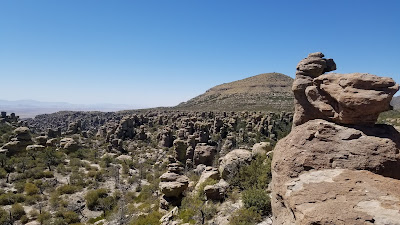 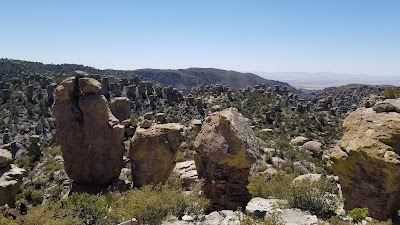 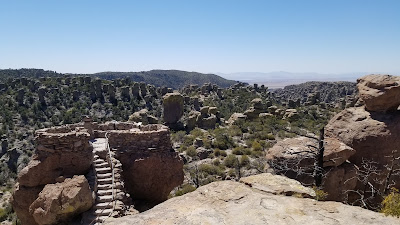 We drove down to the parking area for Faraway Ranch.  Sweden-born Neil and Emma Erickson were among the first permanent settlers in the area when they established their homestead here in 1887.  The family graves are within a small cemetery near the Park entrance, at the very same spot that they took a family photo in the late 1800s.    I’m not sure why the masked Ranger told us a visit to Faraway Ranch was a “must see” during these times of COVID.  Not only was the building closed to visitors, but you couldn’t even glimpse through the windows—they were covered with a darkening film!  What the heck is that all about?  Anyway, the property has an interesting history (we viewed inscriptions from area Buffalo Soldiers on the home's chimney) and an abundance of wildlife including woodpeckers, Mexican jays, and two bucks who were foraging nearby. 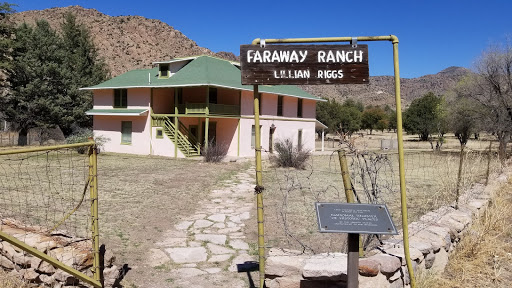 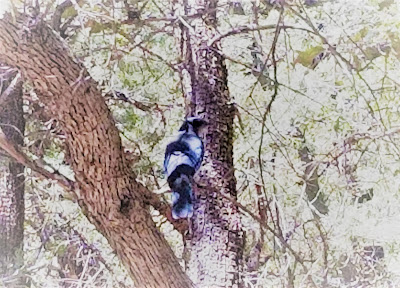 The following day we visited Fort Bowie National Historic Site outside Wilcox, AZ.  We relived history as we traversed along Apache Pass Road.  From this road, you see the original Butterfield Trail, where U.S. mail and stagecoach passengers traveled through the dangerous areas of Chiricahua Apache homelands.  We saw the site of an altercation known as the Bascom Riot. 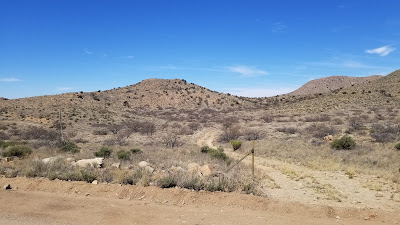 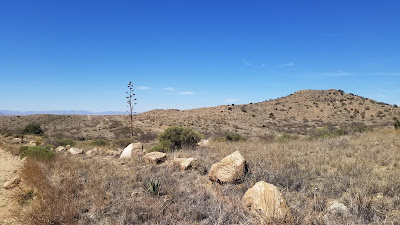 After 8 miles of rough, washboard gravel roads (and me thinks some dislocated body parts!), we arrived at the Fort Bowie Ruins Trailhead.  As we hiked along the 1.5-mile trail, I was transported back in time.  From miners, to Indians, to mail carriers, to stagecoach passengers—all lives were interwoven here.  We came to an Apache camp, which was prime real estate in its time due to its proximity to the natural water source Apache Springs.  We stopped at Post Cemetery to say a prayer for the souls of those interred:  One of Geronimo’s children, soldiers, and stagecoach personnel.   We reached the ruins of the original Fort built in 1862.  A second, more encompassing Fort Bowie was built nearby in 1868 and used in the military operations against Cochise, Geronimo, and the Chiricahua Apaches.  We chatted with the volunteers at the Visitor Center and I was thrilled that I was permitted to peruse the exhibits. 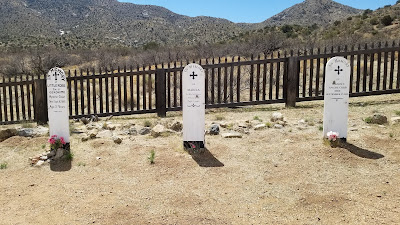 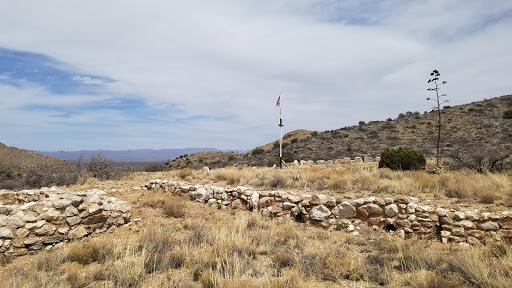 We took the Ridge Trail back to the parking area.  While more rigorous than the Ruins Trail, it was well worth the effort.  Such magnificent vistas and panoramic views!  When I cast my eyes upon the miles and miles of majestic mountains and the vast wilderness, I pondered why the government just couldn’t keep its treaty promises and let the Chiricahua Apaches (as well as other American Indian tribes) keep a portion of their homelands.  Why does it need to be all or nothing? 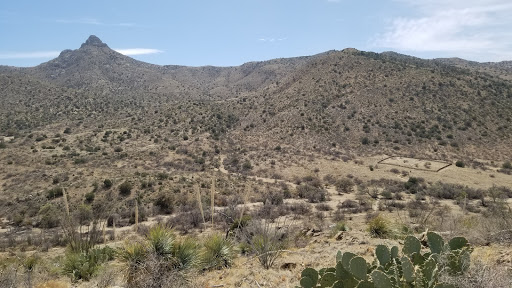 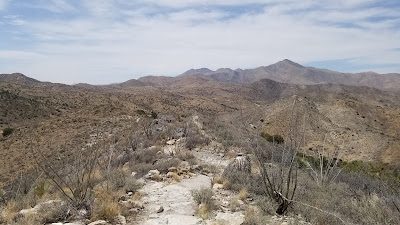 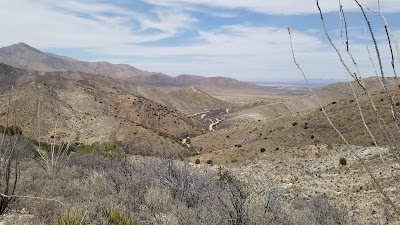 We drove back for our final night at the Bisbee RV Park at Turquoise.  I know, you are wondering why we did so much driving instead of staying at RV Parks closer to our destinations.  The answer is that we have an ornery, older but much-loved tabby cat who is not fond of traveling anymore.   So we make sacrifices.  We gave her a few extra days of staying stationary while we spent time driving/touring.  Anyway, she is going to be traveling quite a bit the rest of the year.  We are making another trip East, which was unexpected and unplanned.  But we want to help Mom’s dearest friend, my Aunt Maureen, with her small farm.  Uncle Ted has not been well, and Aunt Maureen has her hands full working fulltime and trying to be Old McDonald.  I think we were meant to go help.  We have no RV Park reservations and no summer volunteer gig lined up, which is highly unusual for my parents—our travel itinerary normally is set in stone for the full year before the year even starts.  Our only “plans” were to boondock as much as possible, play with our off-road vehicle, and tour more of NV, UT, MT, and AZ before volunteering at the Albuquerque Balloon Fiesta in NM in September.  It was divine intervention that we found an RV Park in NJ that could fit a setup our size, and it is within 45 minutes of Aunt Maureen’s property.  And the Park can accommodate us for an extended (2 month) stay, though not before May 1.  No problem, for us--we will do some touring along the way.

I’ll talk to you again real soon to tell you about our travels East!

Posted by PoPo The Rambling RV Rat at 4:58 PM