Many things have changed here at Escapees Rainbow’s End after our nearly 9 months on the road.  Many area homes have been sold, bringing new life to an older community.  Even undeveloped lots that have been vacant for years suddenly have been purchased.  Several folks who have resided for years at Rainbow’s End RV Park are now gone due to changes to Park rules about lengths of stay (that's why we love having an ERPU long-term leased lot).

One thing that never seems to change is the crazy Southeast Texas weather. The calendar indicated it was Autumn; the leaves were falling; Halloween decorations were adorning front yards, and squirrels were foraging to stock their pantries for winter—but No one told Mr. Heat Mizer!  It was unbearably hot and sticky thanks to 90F degree temps, 70% humidity and dew points of 75.  Then, it would turn unseasonably cool for a day or two before the temps and humidity shot right back up.  We need to get back to Arizona to dry out our bones! 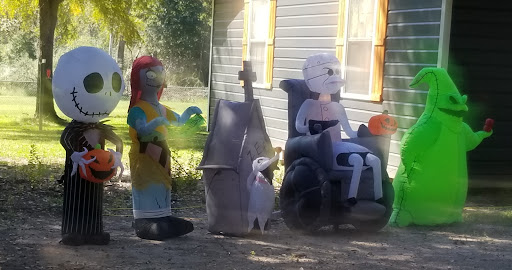 We didn’t let the 3-H-Days (hazy, hot, humid) interfere with our fun, though.  One day we visited Gladys City Boom Town in Beaumont.  Operated by nearby Lamar University, Gladys City was home to Texas’s first Oil Gusher known as Spindletop.  And Spindletop was a whopper of a find in 1901!  It gushed oil for 8 days before they could cap it, causing them to lose 100,000 gallons.  The first 6 gushers at Spindletop field produced more oil in 1 day than all the oil produced in the world at that time! The Museum consists of replica businesses and outbuildings that would crop up near a producing oil field, from tavern to blacksmith, from printer to barber shop.  The buildings house artifacts and documents from the Spindletop days.  And best of all, there is a reenactment of an oil gusher.  Don’t worry, they only use water, but it sure looks cool watching it spurt 100 feet into the air, creating a bit of a rainbow.  This is a fun place and well worth the $5/adult admission price, though I was a bit bummed initially because they did not show a film.  I got over my disappointment quickly, however, when I learned they were holding a car show the day of my visit.  Some awesome rides were on display!

On another day we visited Millard’s Crossing Historic Village in Nacogdoches.  It consists of buildings from the mid-1800s to the early 1900s that were moved from various locations within Nacogdoches and restored to their original glory.  Millie the Mouser greeted us enthusiastically upon arrival.  But my heart still aches for my own tabby cat, so I would not succumb to the feline's demands for attention.  The self-guided building tour educated us further on East Texas history and culture.  Afterwards, we visited the various campus gardens at Stephen F. Austin University, witnessing the final days of bloom for the camellias.  Then we indulged in some grub at the Peking Chinese Restaurant. 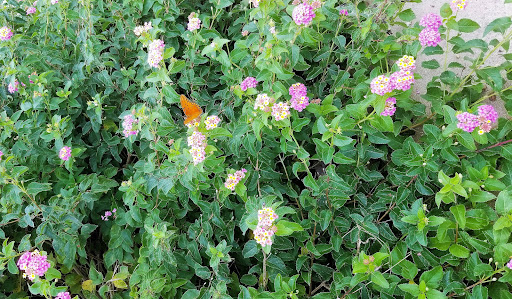 We had an opportunity to attend several great musical performances in town.  The trio Taylor Red is from Mississippi and sings as well as composes Country music.  Apparently, they made it big on Tik-Tok, though this stuffed rat doesn’t subscribe to the app so I can’t verify such things.  Anyway, the act’s name is derived from the fact they are young red-headed triplets whose surname is Taylor.  A talented bunch of gals for sure, with some great fiddling included in their sets.  Another concert was Seals and Crofts 2, where Lua Crofts and Brady Seals perform the hits of their father (Dash Crofts) and cousin (Jim Seals) like Diamond Girl, Summer Breeze, and We May Never Pass This Way Again.   Their repertoire included some of Brady’s original compositions, too.  Good music and the artists had a great connection with the audience with telling backstories to songs and to the lives of their ancestors.  Lastly, we attended a concert of the Livingston Community Swing Band.  A darn good performance for not being able to get together to practice for 18 months!

Mom and I continued to do our daily 5-mile walks, with Dad joining us a few times per week.  But we all got bored taking the same routes every day to get our mileage, particularly since we had to ward off so many unleashed nasty and aggressive dogs along the way.   So to break up the monotony, we completed another section of the Lone Star Trail within Sam Houston National Forest in Huntsville and hiked at Kit McConnico Park in Lufkin. 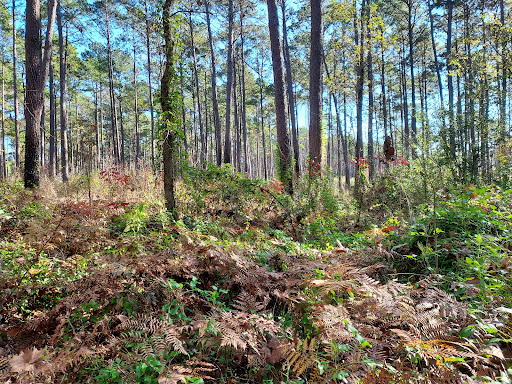 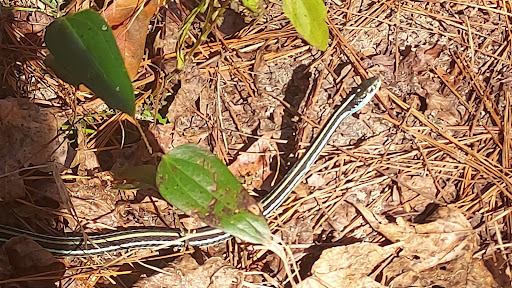 Additionally, we purchased a Texas State Park Pass for $70, giving us an opportunity to hike the trails within Lake Livingston State Park.  The Park is only about a 15-minute drive from our lot. Though busy on weekends, during weekdays it offers a peaceful and tranquil setting in which to hike among the long-leaf pines, 1 of 6 pine tree varieties found within the Park.   This pine variety is logged frequently since it grows tall and straight with few branches.  The Park contains lots of young long-leaf pines, but you will spot old timers towering 100 feet above you when you look up and observe.

Big Boomer, our medium duty truck, was back in the shop for repairs (wheel bearings) and maintenance, so we rented a car for a week.  Big Boomer’s hospital bill amounted to $2,500 (not counting the rental fees), but we need to keep him healthy as he ages.  We used the rental and our Texas Pass to explore Mission Tejas State Park.  It is just about midway between Houston and Dallas, and our scenic route took us through a portion of Davy Crockett National Forest.  What a beautiful Park--quiet and serene with a variety of trail terrains.  The Civilian Conservation Corps (CCC) was responsible for building this Park in 1934.   Their work projects included erecting a replica of the first Spanish mission established within Texas in 1690, after which the Park is named.  Our 7.5 miles of hiking included a small section of El Camino Real de los Tejas, the royal road of the Spanish empire.  El Camino was the predominant overland route between Natchitoches, Louisiana and San Antonio, Texas (we had hiked along portions of this route on our past visits to San Antonio).   We thoroughly enjoyed this Park, though no way could we ever fit within their campground. 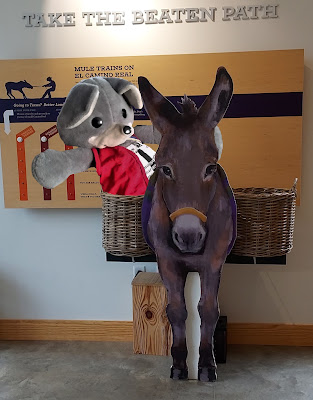 To maximize our Pass investment further, one day we went biking at Huntsville State Park about 45 minutes away, stopping to say a quick howdy-do to nearby Sam Houston, something we do annually. 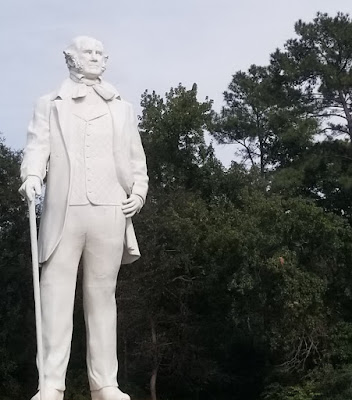 We stopped at Village Creek State Park for a short 2-mile trek enroute home from Gladys City Boom Town.  This Park is small and older with just a few campsites, none of which could handle bigger rigs.

We also visited Martin Dies State Park in Jasper, another quiet place on weekdays with virtually no one on the trails.  It was a glorious day with perfect temps and cool breeze.  I wanted so badly to ride the motorcycles to the Park.  But Dad’s bike-to-trike conversion by CutNShoot Customs put his wheels out of commission for the ENTIRE TIME we have been in Livingston.  (I’ll tell you the saga in another post.  Hopefully by then I won’t get distracted by Mom ranting constantly about the contractor’s lack of time/project management skills and his making of unattainable promises!) Bottom line, the extent of my motorcycling was joining Mom on 2 short runs to town for errands and 2 laps around the CARE Center in the Patriot Guard honor ride for Retired Colonel Sinclair who resided there.

My whole family shed a few pounds this year, including Suite Retreat.  Yes, we held our annual “purge”, re-evaluating the needs for our nomadic lifestyle.  Mom still will not part with her snow shovel (she argues we have used it on too many occasions, including the blizzard we encountered in British Columbia in 2016 enroute to Alaska). However, we all agreed we could part with some of the winter clothes we have carried around for 10 years, extra duffel bags/luggage, and housewares, all of which we donated to the Escapees CARE Thrift Shop within the Park.  Since our beloved tabby cat crossed Rainbow Bridge, we also donated 40+ pounds of kitty litter, a variety of kitty cookies, and Science Diet prescription kibble to the Polk County SPCA.  And in order to make room in Big Boomer’s garage for the trike, Dad sold his Kennedy tool cabinets.

Joe Arnold, known by most of us as Movie Man Joe, was back at Rainbow’s End this fall.  So, he kindly hosted movies at his site for Park guests and residents until he could host them in the reopened Clubhouse.  We so enjoy and appreciate his efforts, particularly since our over-the-air television gets us very little reception while here at home base.  Speaking of movies, we went to the Lufkin AMC to see the Addams Family.  We hadn’t been to the movies since leaving Idaho last September, where we frequented the small one-screen, family owned-theaters regularly.

We enjoyed dining out several times with good friends Lisa/Jim and Romalee/Tim, although we often forgot to take photos.  We had an opportunity to reconnect with Trixie/Allen, whom we met at Rainbow Plantation RV Park in Summerdale, Alabama in April 2021.   And Ralph/Linda, fellow DRV owners, came by to introduce themselves.  We got along so well, we ended up breaking bread together on another occasion.   All interesting conversations, good food, and fellowship with great folks—the perfect recipe for fun times. 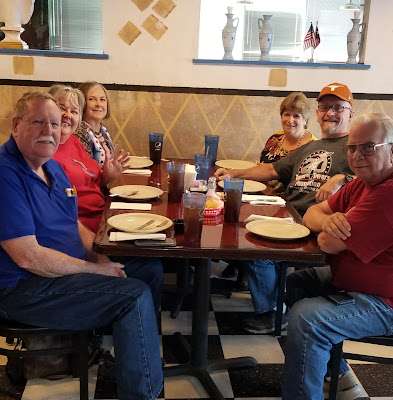 Dad’s got a new hobby.  He earned his Tech and General HAM Radio licenses this fall, so he has been busy buying and making some “tools of the trade”.  Now I’ve got HAM with my cheese!

We are having a quiet Thanksgiving Day here at home, which is how we like it.  Mom made Dad a yummy plant-based Thanksgiving feast, which included a veganized version of Moussaka and mac ‘n “faux” cheese made of cashew nuts.  Though not a huge fan of plant-based like Dad, I must say it was pretty tasty!  Thanksgiving is our official Christmas kickoff.  So gotta run, time to keep with tradition with a viewing of Miracle on 34th Street and Christmas Vacation.

Talk to you again soon!

Posted by PoPo The Rambling RV Rat at 7:05 PM