We left the Verde Valley Fairgrounds in Cottonwood, AZ by 9 a.m. on a glorious Spring day.  As we traveled onto AZ-260, I watched the scenery change from desert cacti to forests of Ponderosa Pines, with remnants of snow lingering in a few areas.  The road that day was lightly traveled, which is probably why I spotted a couple of coyotes moseying across the roadway at a leisurely pace.  Unfortunately, my paws were not quick enough to capture the moment via photograph.

We arrived at AJ’s Getaway, a new built-from-the-ground-up RV Park.  It is located in Overgaard, on the Mogollon Rim in the White Mountains of AZ, at a 6,500+ foot elevation.  We have been following the trials and tribulations of this entrepreneurial couple for the last 2 years in their bi-weekly blog within RVTravel.com.    Owners Machelle and AJ are warm, friendly folks who had a dream.  Through their labor of love, blood, sweat equity, and tears, they made their dream a reality.   They did a great job laying out this place!   The roads are double wide, offering easy maneuverability.  The sites are all pull-throughs.  They are level and GINORMOUS in size.  The sites offer tremendous privacy, though they do have “group” site areas in which those traveling with friends can camp together and socialize.  They offer free WI-FI, and our phones utilizing Verizon services worked well here.   And if you are an off-road enthusiast, the Park is less than a ½ mile from loads of trails, which was a big selling point for us.  None of this comes cheaply, however.  Rates range from $65 (Mon-Thurs)-$90/night (Holiday weekends).  But we are always happy to support family-owned/operated enterprises. 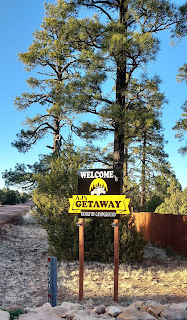 We got settled in and took a walk around the Park, which led us to receiving a tour of the Office/Store that AJ and Machelle have been working diligently to complete.  They have some lovely features planned like tongue/groove ceilings and solid wood bar tops on the outside porch where guests can sit and enjoy a cool beverage.  I call it upscale rustic and super welcoming!

Machelle and AJ gave us the rundown on local trails, so we set out the next day on Rat Patrol II, our Polaris RZR 570, to FS Road 50 within Apache-Sitgreaves National Forest.  This road was in very good shape.  Furthermore, it was early in the day, mid-week, and off-roading season was not yet in full swing, so we had the trails virtually to ourselves.  We were hoping to see some of the wild horses that reside here.  We went about 5 miles in, following the poop piles.  They acted as cairns to show us the way to our first sighting:  a mamma horse and baby way back on a ridge.  We hiked as close as we could without going down into a gorge.  But they were just the tip of the iceberg.  We encountered a dozen more wild horses as we approached miles 8-10 on FS-50.  These beautiful creatures were enjoying their brunch and were unfazed by us stalking and admiring them.  We saw herds of mule deer, too.  We even spotted a lone coyote, though he would not accommodate me by posing for a photo.  We hiked along Fence Line Trail, entertained by the local squirrels as they frolicked and foraged.

The following day we hiked within the Forest Service Trails behind AJ’s Getaway.  The main trail goes on for miles and miles through the high plains desert, leading you all the way out to I-40.  We clocked 5 miles, and we even captured a geocache.  Later in the afternoon, we hopped on Dad’s trike Maximus and rode to Holbrook to meet up with RV friends Rosemary/Jeff, who were in Joseph City enroute to California.  We all ate an early dinner at Mesa Italiana, one of the eateries along Historic Route 66, which has tasty pizza and attentive service.  This establishment was very accommodating to Dad’s dietary needs, too.  We had such a great time catching up (we last were together in December) and sharing laughs, it was nearly dark by the time we parted ways, which made for a chilly ride home.

After a hike on a windy morning, we spent the next day in Snowflake doing errands.  The windshield of Big Boomer, our medium duty truck, caught a rock recently.   We wanted to get the chip repaired ASAP, especially since we purchased a new windshield to the tune of $485 just last year.

Friends Randy/Deb, fellow participants in the Amazon CamperForce program at Hazlet, TX during the 2016 holiday season, gave us a wonderful tour of their hometown, Show Low.  This area, nestled within the White Mountains and settled by Mormons, is simply beautiful.  We visited the Town Center, where we learned that Show Low got its name from the outcome of a card game!  Randy/Deb shared with us their beautiful property that they lovingly maintain and decorate so creatively.  They also showed us various sub-divisions and places of interest in the area including Fool Hollow Recreation Area.  Fool Hollow Lake was created in 1957 by the damming of Show Low Creek.  The snarky name “Fool Hollow” refers to Thomas Jefferson Adair’s efforts to farm the flat-bottomed hollow in the 1880s (before the damming).   His fellow settlers believed his idea was foolish, chortling that “only a fool would try and farm this place.”  But Mr. Adair got the last laugh.  He persevered and was able to grow vegetables, despite the salty/sandy soil.  This Mormon settlement was eventually abandoned in 1906, and it now lies under the waters of the man-made lake created by the dam.  Randy/Deb were gracious hosts, so as a thank you for their hospitality, my parents treated us all to an enjoyable lunch at the Red Devil Italian Eatery.  Good times and good food with great people--a trifecta of happiness.

Despite it being another windy day, we spent it exploring more trails with Rat Patrol II, logging several geocaches along the way.  The folks who place geocaches out here take it to the highest level—huge, official cache boxes filled with tons of novelties, plenty of pens and log paper, and unusual hiding spots to boot.  We rode out to Black Canyon Lake.  Like Fool Hollow Lake, its water level was extremely low.  Burned out forests from a 2002 wildfire surround the lake, though horses, including mommas and their new colts, are still enjoying the area.  We continued riding, finding ourselves in Pleasant Valley on the site of the Baca Ranch, where survey markers and the family graveyard are all that remain.  Juan Baca, his wife Damasia, and family settled in this secluded Mogollon Rim area in 1899.  The information board had a photo of their homestead—surrounded by 100+ inches of snow!  These folks were true survivalists, especially Damasia, who in 1903, just 4 years after settling here, found herself a widow raising 7 daughters and 1 son.  As we were leaving Apache-Sitgreaves National Forest, we read some placards that stated there are petroglyphs here that date from 800-2000 years ago.  We found the petroglyphs difficult to photograph from the road.  But our efforts to get closer were stymied.  The trail leading to the pictorials was closed.  No matter, we had a fun-filled day spent in the beauty of nature, and topped it off that night with a sighting of the International Space Station (ISS).

The next day we walked over to the Shepherd of the Pines Methodist Church for Palm Sunday services.  It is a small congregation, but the Pastor and members all welcomed us warmly.  They even invited us for their luncheon.  However, we had to break down our site and put our "toys" away (Maximus in the truck garage and Rat Patrol II onto the swivel wheel), for our time in Overgaard had come to an end.  We were to leave the next morning--or so we thought.  But forecasts of 40 mph winds with gusts up to 60 convinced us to extend our stay another night and hunker down.

Well, time to sign off.  I'll talk to you again soon.