We left the San Luis Valley and traveled along US-285, crossing the Rio Grande River.  We said goodbye to CO and were welcomed to NM.  We pulled into a wildlife crossing/viewing area.  Though nearby Carson National Forest boasts an elk herd of about 2,500, none of them were out and about that day.  But I could just imagine the scene during migration season:  hundreds and hundreds of elk crossing the range of the San Antonio Mountains.

We made a reservation in advance at Trailer Ranch RV Resort in Santa Fe because we would need a dump/pump coming off boondocking for several days--or so we thought.  But as I mentioned in my prior post, we did not boondock in San Luis Valley and went into a full-service RV Park instead.  Alas, sometimes the best laid plans go awry.  Hence, we ended up paying $70/night for a back-in site at Trailer Ranch.  Ironically, they had a sewer line backup (which they failed to mention until payment was made and we were parked in our spot.)  So, it was fortuitous that we didn’t boondock in San Luis Valley ‘cause it alleviated the need to dump upon arrival at Trailer Ranch.  Funny how things work out, ain’t it?

Trailer Ranch RV Resort is on a main drag in Santa Fe, so it is a bit noisy. But with a bus stop just a block away, it is extremely convenient to access Downtown.  And the bus costs only $2/adults ($1/seniors) to ride all day long.

So, over the next 2 days we hopped on and off the bus to explore Santa Fe.  We visited the historic rail yard district.  What once was a transportation hub is now a hotbed for the art community, consisting of unique shoppes and galleries.  Objets d'art still catch Mom’s eye, but her spending money on them no longer occurs (trading from a sticks/bricks with ½-acre property to the nomadic, minimalistic RVing lifestyle sure protects my cheese inheritance money).  We did enjoy walking through the open space gardens.  Because it also is an art district, we nixed going to Canyon Road.  Instead, we focused on touring religious and cultural sites.

Since it wasn’t far from the rail yard, we walked over to the Santuario de Guadalupe, a shrine dedicated to the vision of the Blessed Mother seen by Aztecan Juan Diego in 1531.  Though the Chapel itself was closed, we perused the lovely grounds.  Mom was enthralled with the gorgeous roses that adorned the Church property. 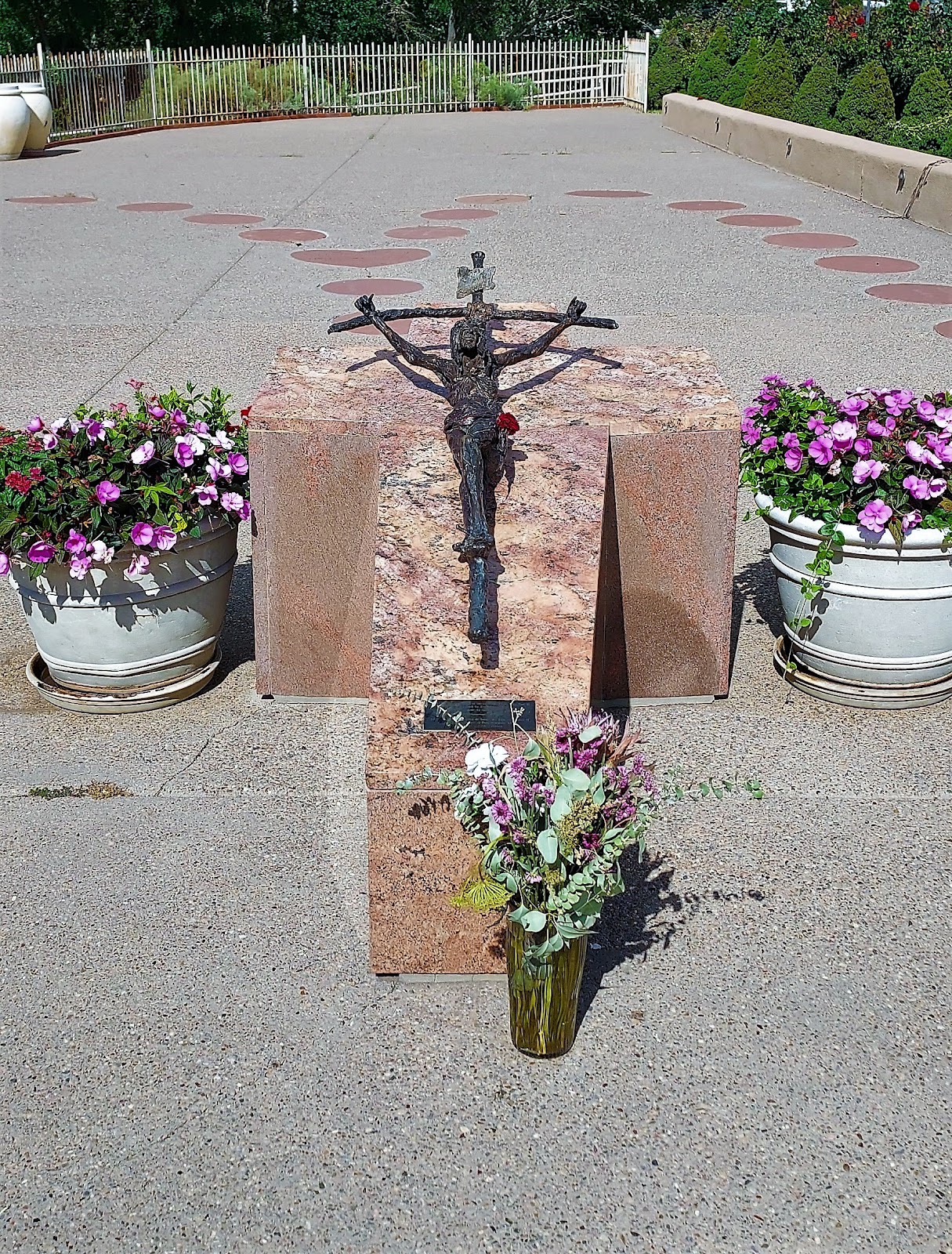 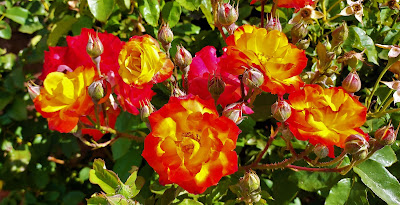 The Historic Plaza was quiet when we arrived at 8:30 a.m., but before long merchants were hawking their wares outside the Palace of the Governors, the adobe structure that housed ruling parties since 1610.

We entered the Cathedral Basilica of St. Francis of Assisi.  While the current structure was built between 1869 and 1887, it sits on the site of the original adobe church built in 1610.  While much less ornate than most Cathedrals, there was beauty in its simplicity.  Perhaps this is because St. Francis, though born to a wealthy family, took a vow of poverty.  St. Francis believed that God was manifested in nature, which is why he loved all creatures, great and small.  No wonder he is considered the patron saint of animals.  As I learned about St. Francis, I thought lovingly of my deceased Grandma and my Aunt Maureen and Uncle Ted.  They both offered love and care to stray/unwanted animals.  I was a little freaked out by some of the “relics” kept in the small side chapel of the Cathedral:  strands of hair and bone fragments of various saints.  The Basilica grounds contain a prayer garden with bronze sculptures of the Stations of the Cross created by Gib Singleton, a Santa Fe resident.  What a perfect place to say (or sing, if you can carry a tune) the Prayer of St. Francis:  Lord, make me a channel of your peace, where there is hatred, let me bring love…” 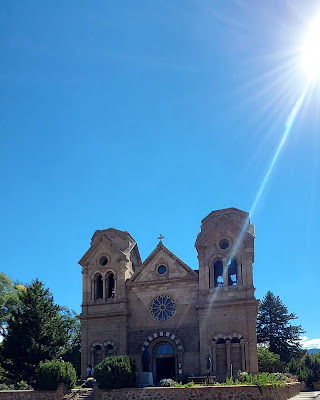 We popped into La Fonda Hotel on the Plaza, built by the Santa Fe Railroad.  Mary Coulter, who designed masterfully many of the buildings at the South Rim of the Grand Canyon, had a hand in La Fonda Hotel’s design.  You could see her influence and style, particularly with the lobby hearth and the hand-painted interior windows within La Plazuela, one of the hotel’s restaurants.  We browsed some of the shops, and I even made some friends. 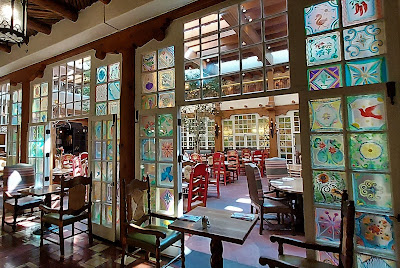 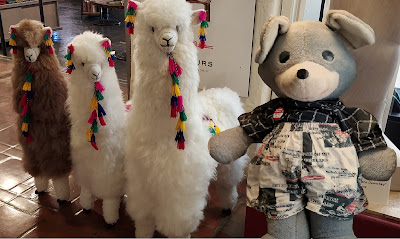 Another stop on our travels was Loretto Chapel, also known as the Chapel of Our Lady of Light.    The Chapel was the sanctuary for Loretto Academy, a parochial school operated by the Sisters of Loretto from Kentucky for 100+ years (1853-1968).    The Chapel construction was completed in 1878 and is said to be the first Gothic-style structure built west of the Mississippi River.  Its unique feature is its spiral staircase, which comes with a tale of mystery and miraculous divinity.  As the story goes, the Chapel was built initially with no access to the choir balcony.  The limited size of the Chapel prohibited the inclusion of a stairwell.  And since the Academy was an all-female establishment, the traditional use of ladders for male singers was not an option, for it would not be lady-like for girls and nuns to climb.   So, the Sisters of Loretto performed a novena, praying 9 days to St. Joseph, the patron saint of carpenters.  On the final day of the novena, an unknown carpenter showed up.  Within 6 months and using only simple tools (a saw, a square, and a hammer) and water to soak the wood, the nameless craftsman created a masterpiece.  Consisting of 33 steps and towering 23.5 feet high, the circular stairway makes 2 complete 360 degree turns, all without any center or side supports (the ballister was added much later to assist the nuns with daily use).  And as mysteriously as he arrived, the carpenter disappeared, neither asking for nor receiving any monetary payment.  When the Loretto Academy closed in 1968, the nuns asked the Archdiocese to purchase the Chapel.  I was shocked and a bit perturbed to learn that the Archdiocese declined the request.  Fortunately, the Chapel was purchased instead by a private family in 1971.  They operate it as a museum ($5/person donation) and wedding center, preserving the Chapel’s “legend of the miraculous staircase”.

San Miguel Church near the Santa Fe River is the oldest church in the USA.  It was built circa 1610 by Tlaxcalan Indians for Franciscan friars to conduct religious services.  The docent said guests could strike the 1856 bell that now sits inside the sanctuary rather than in the bell tower.  You know I took advantage of that opportunity!

It only seems to reason that Santa Fe’s “Oldest House” would be found near the aforementioned San Miguel’s Church within the El Barrio de Analco Historic District.  Said to date back to 1200 a.d., the adobe house located at 215 De Vargas Street was built on the foundation of an ancient Indian Pueblo.  And De Vargas Street supposedly has the specter of one Juan Espinoza roaming the area, looking for his head that was severed during a bruhaha with some area witches.  Santa Fe is full of legendary tales!

Though we took the bus Downtown, we toured most of the area by foot.  We trekked along portions of the Santa Fe Trail, El Camino Real de Tierra Adentro, and Historic Route 66.  By the end of our visit, our dogs were barking up a storm!

There was so much more to see and do in Santa Fe, I wish we had a few more days to explore.  But we are due for our volunteer commitment at the Albuquerque Balloon Fiesta.  Talk to you again soon!

PoPo The Rambling RV Rat
My name is PoPo-G-G-O, and I'm a Rambling RV Rat. I’ve been RVing full-time for over 10 years with my human Mom and Dad. After planning for retirement for 14 years, my family sold our “sticks and bricks” home with our half acre of property. We sold or donated most of our material possessions. We were blessed to experience an epiphany many years ago—God provides us with the basic necessities for our existence. Everything else is “nice to have” but is not required to experience happiness or contentment. We now live a more minimalist lifestyle. We still have everything we truly need and the few material possessions we truly want. We loaded the motorcycles into our custom-built truck, hooked up our home on wheels, and now travel around this great country. Whether staying somewhere for six months, visiting for just six days, or just stopping over for 6 hours, we experience a new sensational sunrise and a different breath-taking “backyard” view everywhere we go!