We left Off Road RV Resort in Cainsville, UT at 8 a.m. with temps already at 80F degrees.  We had a 3.5-hour drive along UT-24, I-70, and UT-128 to arrive at Buzzard’s Belly General Store, our overnight Harvest Hosts site in Cisco, UT, about 40 miles from the Colorado border.  In the 1880s, Cisco was a thriving watering town along the route of a steam locomotive line.  In the 1920s it had an oil boom.  During its heyday, it boasted a population of 200.  But with steam no longer fueling locomotives and the oil boom going bust, things dwindled rapidly.  Cisco received its final death throw when I-70 was built and bypassed the town.  It became a true ghost town with nothing but rotting buildings, abandoned vehicles, and few other remnants of yesteryear.  Cisco’s claim to fame is that scenes from the 1991 film, “Thelma and Louise” were filmed on site.  In 2010, Eileen Muza decided to make Cisco her home.  She created an “artist in residency” program, wherein some useless junk has been crafted into some very cool artistic creations.  Today Cisco has 4 residents, including Janine and her hubby, who purchased an old truck repair operation in 2018 and turned it into Buzzard’s Belly General Store.  And land is for sale should you wish to become a “local”.  Buzzard’s Belly is an excellent Harvest Host site.  The parking area is huge, with easy accessibility and maneuverability.   The owners have spent time and resources to level off a good portion of the lot, which is especially appreciated by folks like us with longer, heavier rigs.  Janine is personable and gracious. We were excited she carried local farm fresh eggs in the store for us to purchase.  We walked around the main area of Cisco envisioning the town in its prime.  We admired the creativity of the artists in residency and laughed at the antics of the nearby prairie dogs.  The parking lot gave us a wonderful venue from which to watch the lunar eclipse and International Space Station (ISS) fly by at the same time! 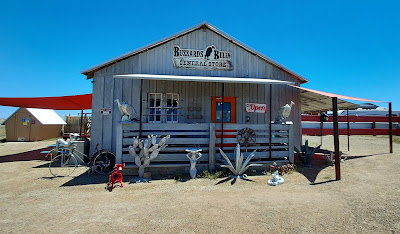 A passing train acted as my alarm clock the next morning as I arose to witness a lovely sunrise.  We departed at 7:45 with Mom at the wheel, taking UT-128 about 5 miles to I-70.  After passing the state line, we turned onto CO-139.  Mom forfeited the wheel when we entered Douglas Mountain Pass—she gets anxious driving those winding roads with steep inclines and descents.  These roads were in bad condition and extremely rough from all the patch jobs done through the years.  We read that the road has not been repaved since it was done initially in the mid-1970s.  Dad warned me to strap myself in and to use caution when opening the RV cabinets, so I knew we were in for a wild ride.  Once through the pass, we noticed several interpretive sites.  But the rest stops/parking areas were tight squeezes for our behemoth setup.  Only 1 looked like we could fit, but the road sign cautioned that the maximum length for vehicles was 40 feet.  Bummer, especially since I learned after the fact that these interpretative stops are known collectively as the Canyon Pintado National Historic District. As Spanish priests passed through the area in 1776, they noticed the various rock art created by the Freemont Indians, thus naming the area  “Painted Canyon”.

We traveled on to CO-64, another rough ride attributed to poor road conditions.  We made it to the town of Dinosaur, CO on US-40 without me hurling the huevos that I had for breakfast.  We notice that everyone here and in neighboring towns embraces their dinosaur heritage by erecting life-sized statues of the reptiles. We turned left onto Harpers Corner Road within the Canyon Area of Dinosaur National Monument.  We traveled approximately 14 miles before turning left onto Blue Mountain Road/Moffet County Road 16, to the dispersed camping area operated by the Bureau of Land Management (BLM).  Though this camping area is quite a bit off the beaten path, it offers peace, serenity, hiking, and magnificent views of the canyons.  Our Verizon service was pretty good, too.  There are only about ½ dozen sites within 1.5 miles of the road entrance, but fortunately there are a few that can accommodate big set-ups like ours.  We knew additional boondocking opportunities existed at Echo Lake, about 20+ miles further down Blue Mountain Road/Moffat County Road 16.  But from what we read, the sites are small, the road is rough, and 4X4 high clearance vehicles are recommended.  Weather would play a factor there as well, as the road becomes a muddy mess.  So, we were content setting up where we were.    Unfortunately, some of the neighbors were not very welcoming. 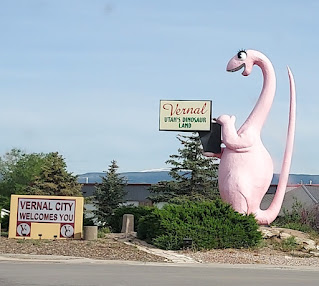 Video from our campsite:

Supposedly, there are no fossils in these canyonlands.  (These lands were only added to the Monument in 1938 to ensure no development occurs.)  All the dinosaur bones are in Vernal, UT.  So, the next afternoon we took the 45-minute drive to the Quarry Visitor Center.  We watched the film, and I worked on my Junior Ranger booklet while my parents perused the Campground in which our setup will not fit (there’s a surprise).   Rather than drive over to the Quarry Exhibit Hall and other formations in the area, we decided to hike over, getting in 3 miles round trip.   The dinosaur fossils in the Quarry Exhibit Hall and in other nearby rock formations provide quite a comprehensive paleontological record.  It was fascinating to see the skeletal remains of these massive monsters.  One of their femurs were taller than me and Mom!  And to think there are bones UNDERNEATH the Quarry  building in addition to what we see on exhibit in the Hall!  What an exciting feat it was for Earl Douglas to spot the first 8 tailbones of a sauropod sticking out of the ground in 1909.  Earl was a paleontologist from the Carnegie Museum in Pittsburgh, PA.  Since his initial discovery, the bones of nearly 400 different dinosaurs have been collected from these rock layers.  I thoroughly enjoyed the exhibit—and I earned another Junior Ranger badge! 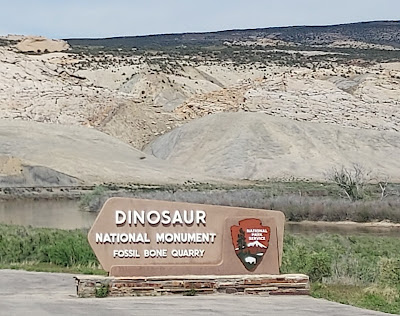 While in Grand Staircase-Escalante National Park, Mom noticed some minor dry rot on our swivel wheel tires. My parents are always pro-active and try to fend off problems before they arise. So, Dad ordered replacements from Walmart.com to be shipped to the Vernal, UT Walmart store, which we would pick up while touring Dinosaur National Monument.  We have ordered from Walmart.com many times in our nomadic lifestyle without incident.  But this time, Walmart cancelled our order citing “fraudulent activity.”  After confirming with our own credit card service that they honored the charge and that they were not responsible for the order rejection, we called Walmart.com to advise that the order was legit.   Their Customer Service Rep said that they would remove the fraud “red flag” and we should replace the order.  Well, after another 3 attempts, 3 failures, and discussions with several useless supervisors, we changed strategy.  We called the Walmart store in Vernal, UT directly.  Interestingly, the physical store has nothing to do with Walmart.com and cannot place orders from the website.  The store has completely different vendors from which to make purchases. The store employees were most helpful in placing an order for us.  The tires were to arrive on Day 2 of our stay at Dinosaur National Monument—or so we thought.  But the shipment was delayed beyond our scheduled day of departure.  So, no tires here, only aggravation and frustration.  At least the current tires are D-rated and still have good tread.  We will watch them closely and order them once we arrive at our summer volunteer gig in Minnesota.

We calmed ourselves from the tire debacle with lunch at Pro Antica Pizza in Vernal.  What a perfect remedy!  Their business model is to serve only 1 size pie (13”), which is a good idea since it saves costs on baking pans and to-go box sizes.   Dad got his usual vegetarian with his plant-based faux cheese.  But Mom and I could not resist the traditional Margherita with fresh mozzarella.  Magnifico!  Their brick oven baked the dough (which was of perfect thickness) at a temperature that made it golden brown but not burned.  Pro Antica earns a Rambling RV Rat 5-cheese rating.

We departed Harpers Corner Dispersed Camping Area in Dinosaur, CO on an overcast, crisp (45F degrees) morning, taking a final glimpse of the gorgeous canyon views and pretty fields of brightly-colored wildflowers.  We hopped on US-40 before traversing along US-191.  This is a spectacular route through the Uinta Mountains, which contain Utah’s oldest fossils.

We then entered Flaming Gorge, named by John Powell during his 1869 Colorado River expedition.  We stopped for a quick picnic lunch at the Flaming Gorge Dam Visitor Center.  Then we went inside to watch the films, a must-do for this Rambling RV Rat.  Construction occurred between 1958 and 1963, and its official dedication was attended by Lady Bird Johnson in 1964.  It stands 502 feet tall, and its length is almost as long as the Empire State Building is tall.  The reservoir created from the Dam provides approximately 365 miles of shoreline.  The water temperature is controlled and kept at approximately 53F degrees, mighty comfortable for the local fish population.  Importantly, the dam’s powerplant has 3 generators with a capacity of 50,000+ kilowatts each, supplying electricity to more than 70,000 homes across several states.  At least those were the stats before recent years of drought. 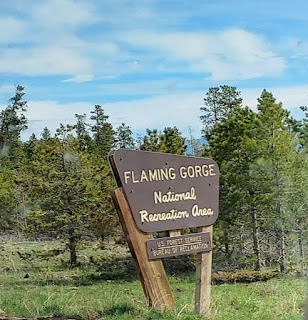 We returned to scenic US -191 and crossed into Wyoming for the rest of the day’s journey to Rock Springs.   We were expecting to have a quiet night boondocking at the Bureau of Land Management (BLM) Middle Baxter Road Dispersed Camping Area.  We were in good spirits and renewed awe of the wonders of our magnificent homeland . 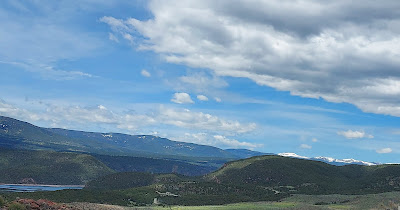 And then it happened.  Big Boomer, our medium duty tow vehicle, suddenly got very, very sick.  He became fatigued and just could not muster any energy.

I’ll tell you about the whole fiasco in my next post.

Posted by PoPo The Rambling RV Rat at 4:40 PM