We had only a short 2-hour drive to our next destination, Valley of Fire State Park in Overton, NV.  But we left early in the morning to scout out an RV site in its Atlatl Campground.  You cannot make reservations, so the early bird catches the worm.  There were only 6 spots in which we could fit within the whole campground, and only 3 of those were available—one back-in (#25) and 2 pull-throughs (#42 and #43).  We opted for Site 43.  It had water and electric hookups, no obstructed views, and no adjoining neighbors on Site 42.  Sites come with a grill, sheltered picnic table, and fire pit.  There is an easy-to-access dump station right outside Atlatl Campground.  Wi-Fi is available at the hook-up sites for an extra fee, which we didn’t purchase.  We had enough sporadic Verizon cell service for our needs. We paid $35/night for our site as non-residents, which included the $10/day Park entrance/day use fee.  And we received a bonus:  getting to watch the fire beetles enjoy the Spring blooms.

After settling in, we walked to the petroglyphs that were on a rock wall not far from our campground. From Gypsum peoples, to Basketmakers, to Anazari-Pueblo, to Southern Paiutes, Indian tribes inhabited these lands 2,000-4,000 years ago, leaving behind petroglyph messages.   It is an amazing feeling to stand in the same spot that someone stood in prior millennia to share information with their neighbors.  While out, we hoofed it over to Atlas Campground to scope it out.  This campground could never accommodate us, but it offers private non-hookup sites tucked into alcoves and within the rock formations, reminiscent of City of Rocks State Park in Faywood, NM.  We stopped to view Arch Rock, which is miniscule in size and quite anticlimactic compared to formations found within Arches National Park in Moab, UT.  Returning to our campsite, Dad and I relaxed while Mom prepared dinner.  Little did she know we would have some unexpected guests.  As darkness fell, we marveled at a shooting star that glided across the night sky before extinguishing.

The next day we hopped on Maximus the trike and headed to the Visitor Center to view the film and obtain my Junior Ranger book.  Upon arrival, we found several big horn sheep putting on a show for Park guests.  We checked out Balanced Rock and snuck a peak at the private area reserved for outdoor weddings, which was quite lovely tucked into the rock formations.

Then we drove over to White Domes.  What a terrific hike!  It is only a 1.25-mile loop, but it contains many interesting and distinctive features.  We admired the awesome multi-colored dunes as we trudged down through sand to the 1966 movie set of the film “The Professionals”.   It had to be 95F degrees down there that day!  But we continued our trek, arriving at a slot canyon that provided a welcomed coolness. 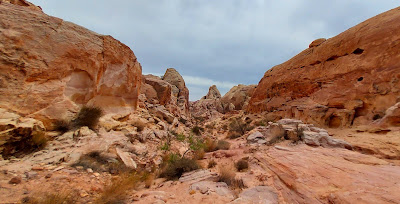 After the hike, we visited the petrified log specimens that reside at the Park and the cabins built by the Civilian Conservation Corps (CCC) when the Park was first established in 1935.

Then we completed the 1.25-mile loop around Elephant Rock, which offered terrific views of the rocks as well as several big horn sheep sightings.  I must say, though, that other than what passed as his trunk, this rock looks no more like an elephant than I do.

Our itinerary the subsequent morning was to hike Fire Wave/7 Wonders.  It is only 2.3 miles, but the Park brochure described it as “moderately strenuous.”   Dad and I made a pact not to share that bit of info with Mom.  Instead, we suggested she take her walking sticks just for added stability, especially since she didn’t have them for hiking White Domes.  The first ¾ mile, representing the Fire Wave trail, wasn’t bad at all.  We were enthralled with the vibrant palette of the canyon walls.  The 7 Wonders trail began with an easy trek through a slot canyon.  But then it entailed some upward rock scrambling.  This is when Mom freaked out a bit, claiming Dad was trying to knock her off.   It was touch and go for a minute, but the old bag pulled through, foiling any of Dad’s perceived plans.

Then we went to Rainbow Vista, a sandy 1-mile round trip hike classified as “easy”.   Somehow we passed up the actual vista point, and kept on hiking down the trail.  Eventually, we came to Fire Canyon Lookout, an unintended destination with a great view.  We did one final hike that day to Mouse Tank.  With a name like that, I just had to visit.  Here’s the story:  a Southern Paiute Indian by the name of Mouse was a wanted man, accused of killing 2 prospectors.  He evaded the law for quite some time by hiding in these canyons near a natural water collection tank.  But he blew his own cover when he left his lair and moseyed into town.

Take a short trike ride with us on Maximus through Valley of Fire State Park:
We returned to our campsite to find we had a neighbor now in pull-through site 42—an electric hybrid vehicle.    She stayed on the site for the next 3 nights.  Wonder if this will be the future situation for hook-up sites in campgrounds?  We already compete with tents and small units taking up the only sites that can accommodate large set-ups.  Looks like we will have EVs entering the equation as well.  I understand that everyone pays the same fee for sites regardless of type of unit and size.  But to me it is common courtesy to take what you need, not what you want, especially when there are other vacant hookup sites in which an EV/tent/small unit could fit easily.
We spent a day running errands and doing laundry in Overton.  While there, we checked out the Bureau of Land Management (BLM) dispersed camping area for future use.  The entry road was a bit rough, but doable.  The area is not particularly scenic since it overlooks power lines.  On the plus side, we had a decent Verizon cell signal for phone/internet. Later in the evening, we hiked over to the beehive formations.  Valley of Fire State Park has such varied rock shapes.

We headed into Las Vegas the next afternoon, getting to Freemont Street in time for dinner.  We chowed down a tasty plant-based cheese and mushroom pizza at Evel Pizza, then started to walk in Downtown Vegas.  We came specifically to see the band 80s Station perform.  We enjoyed their performance in Rapid City, SD back in 2018, and have followed them on Facebook to see if our paths would cross again. While my parents danced and reminisced the night away, I took in the sights.   Freemont Street is like a 3-ring circus.  Performers are EVERYWHERE executing a diverse array of feats: from turning palms into floral arrangements, to impersonating Michael Jackson dancing, from contorting bodies into crazy positions, to scantily-clad women with painted body parts offering to take photos of visitors.  Freemont Street is like Greenwich Village in New York City meets Mardi Gras in New Orleans.  It is SOOOO weird that NOBODY, I say NOT A SOUL, thought it strange to see yours truly, a stuffed rat in Harley Davidson boxer shorts and a dress shirt, walking down the street.  ‘Nuf said.

We spent the next day visiting Lake Mead National Recreation Area.  When we arrived, we learned the Overton Beach Marina has been closed since 2007 due to low water levels.    In fact, Lake Mead is now so low, a human body within a barrel was found recently that is believed to date back to the 1970s.   Additionally, the remains of buildings in St. Thomas Cove, an old Mormon settlement that was flooded in 1938 when Lake Mead was formed, have re-emerged due to dwindling water levels.  We started to drive down the 3-mile dirt road to the settlement site, but it was so washboard, we made it only a mile before turning around.  We parked Big Boomer, our medium duty truck, unloaded the e-bikes, and pedaled to the site instead.  Then we hiked along the 2.5-mile loop trail that took us through the ghost town.  The Mormons arrived at St. Thomas Cove in 1865, finding the lands at the confluence of the Muddy and Virgin Rivers to be fertile for farming.  They learned 5 years later that they were living in Nevada rather than the Utah/Arizona territories and that they owed 5 years of back taxes.  Rather than pay, the inhabitants burned their homes, abandoned their crops and moved to Salt Lake City.  St. Thomas Cove was re-established in the 1880s with an influx of new settlers and peaked with a population of 500.  The foundations of many of their homes and buildings can be seen today.  As we peddled back to the parking area, the winds picked up significantly.  We were glad we took Big Boomer instead of Maximus the trike out for this excursion.

We arose early the next morning to break down camp.  While dumping and pumping, the big horn sheep came over to say goodbye.  Then they began to climb the nearby rocks, showcasing their feats of strength.  I can think of no better finale for our visit to Valley of Fire State Park.

We are now off to Utah.  Talk to you again soon!

Posted by PoPo The Rambling RV Rat at 9:54 PM